I had been painting figures I had found in contemporary news media sources, and felt like I needed to study their precursors in the history of painting. I started with Caravaggio, moved on to Frans Hals, finally landing in the French salon of the 19thC, where I stayed for quite a while.

I needed to go back to Delacroix, to see why I was attracted and irritated at the same time. I'd always had a visceral reaction to, "The Death of Sardanapalus",  and was relieved to read feminist analyses later that articulated that for me.  But I had been taught earlier that Delacroix was the father of the modern brushstroke; I would still die to see the sketch of "The Lion Hunt".  I'd read Edward Said on Orientalism, and wanted to figure out what the "other" was that Delacroix had portrayed. I'd read critiques about Charcot's photographic series of the "insane", and had been attracted to the portraits by Géricault of the same subject. I wondered how much the artist was self-projecting when he was painting. I didn't think Delacroix had the same problems as I did, wanting to be the subject, and be the painter of the subject, at the same time. But maybe he did.

Delacroix self portrait/Orphan at Ornans (excerpts) 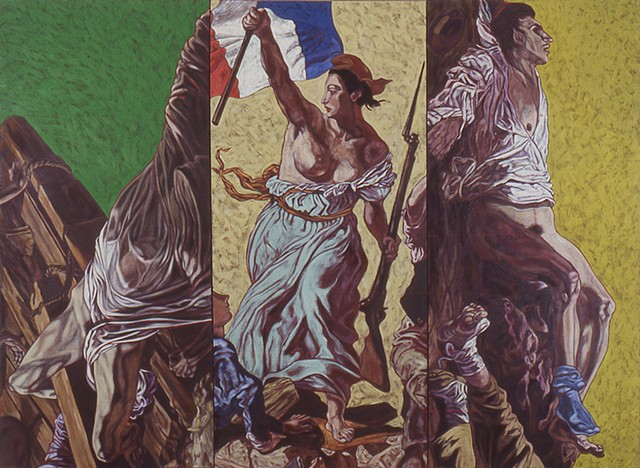 Carravaggio, Supper at Emmaus (excerpts
oil on canvas
24" x 24" each